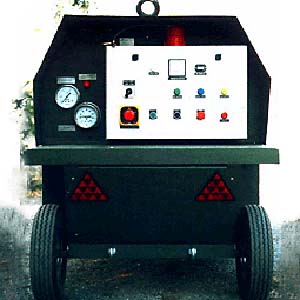 The unit , by means of solenoid valves , blower and heater explosion-proof as well as input filters and air supply and gas , ensures through an automatic sequence of operation the removal of bacteria , moisture and other contaminants accumulated inside the containers during use. 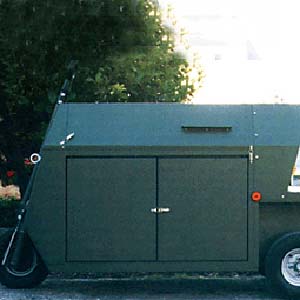 The unit is connected to the vent line and the oxygen outlet of the container in treatment, which, usually, contains a residual amount of liquid non-drainable via two flexible tubes of suitable cross-section stainless steel / PTFE. The gaseous oxygen, even at temperatures close to the dew point of -182.8 ° C (90.2 K) due to the presence of the liquid, is routed from the vent of the container at the entrance of the blower and then to the heater controlled by two temperature controllers. The first, calibrated at 360 ° C and connected to a K thermocouple inserted in the heater prevents accidental overheating of the system; the second maintains the temperature of the gas to the attack of the flexible pipe flow around its calibration value of 120 ° C. The heated gas is sent back into the container previofiltraggio than 5 m from the pressure filter to the pressure, limited to max 147 kPa from the safety valve, normally between 30 and 147 kPa as a function of the degree of opening by means of the filling valve of the container and the degree of clogging of the filter. That procedure referred to "Closed Cycle" continues until the complete gasification of liquid oxygen (if present) and the subsequent reheating of the gas present inside the container until its target temperature in the unit of reclamation does not exceed about 5 ° C than the outside. This condition, which is controlled by a temperature controller installed in the electric dell 'unit, causes the conversion of the system of solenoid valves from closed-loop configuration to that of open cycle with ildirottamento in the environment of the gas which arrives from the vent of the container and the withdrawal of air environment is suitably filtered input (upstream of the blower) and output (after the heater) towards the container in treatment. This new operating mode can continue, also not manned, for several days up to allow the heating of the walls and internal lines of the container at temperatures of about 110 ° C with the subsequent removal removal of moisture and other contaminants possibly present in the same. Accidental overheating of the system would lead off of the blower of the heater and the entry into operation of visual and audible alarms. A phase controller prevents possible inversions of rotation of the motor due to different cabling of the external sockets.